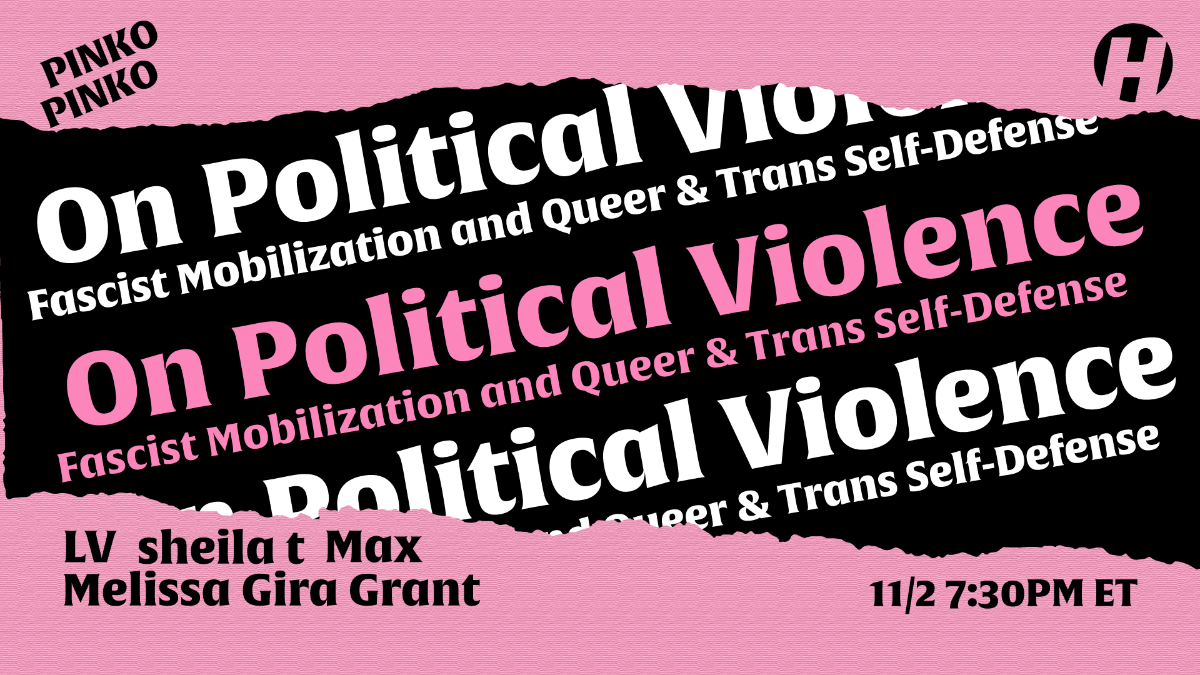 For most of the left, political violence is a forbidden topic. But at this moment, queer and trans people face the real threat of violence from a growing movement of armed fascists in America. How can we think about this, and what steps are necessary to defeat them? What do existing projects to keep us safe have to teach us?

Melissa Gira Grant is a staff writer at The New Republic; the author of Playing the Whore: The Work of Sex Work (published by Verso); and the co-director of They Won’t Call It Murder (executive produced by Field of Vision). She has reported on violence against massage workers in Flushing; attacks on trans rights across Texas; resistance to police killings in Columbus; and the global movement for sex workers’ rights. She’s currently at work on a new book, A Woman Is Against the Law: Sex, Race, and the Limits of Justice of America (to be published by Little, Brown and Company).

sheila t is a huge nerd and trans feminine person and anarchist living in philadelphia. She’s been participating in anarchist and queer struggles since around 2010.

LV is a communist living in Los Angeles. She organized with Bash Back Denver and with the 2010 Bash Back Convergence as well as a number of militant queer groups in Los Angeles such as the Trans Liberation LA, Trans Undocumented Rapid Response Network (TURRN) and 2014 Queerpocalypse. She is a practicing conflict mediator and developing an eco defense video game.

Max (they/them) is a grassroots, abolitionist and antifascist, community organizer from Sacramento, California. Their work primarily revolves around the abolition of private property and prisons, but their efforts to stand up against fascist violence, including state, but specifically far-right and christo extremism have looked like participating and organizing active confrontations to their platforms since 2016, and most recently throughout 2020 to now.

The purpose of Illinois NOW is to take action to bring women into full participation in the mainstream of American society now.

Learn more about us.